How many types of climbing exist?

Have you ever wondered how many types of climbing exist? From climbing on rocks and alpine climbing to sport climbing and ice climbing; we reveal all.

On the surface, you may think a climb is a climb! You just need a bit of rope, some grit and determination, and you’re good to go, right?  Well, if only it were that simple! One of the reasons why climbing on rocks is popular all around the world is because there are so many different types of it.

If you ask someone to name the various types of climbing, though, they will probably come back with two or three answers. Most people only consider mountaineering, bouldering, and sport/trad climbing. Some people may simply stare back at you completely perplexed! However, there are many more methods than these. Of course, some climbing methods have similarities, yet others are unique.

It is good to learn about the different options that are available to you so that you can try out new climbing activities. You never know; you may stumble across a new favourite! So, let’s take a look at all of the different types of climbing out there. 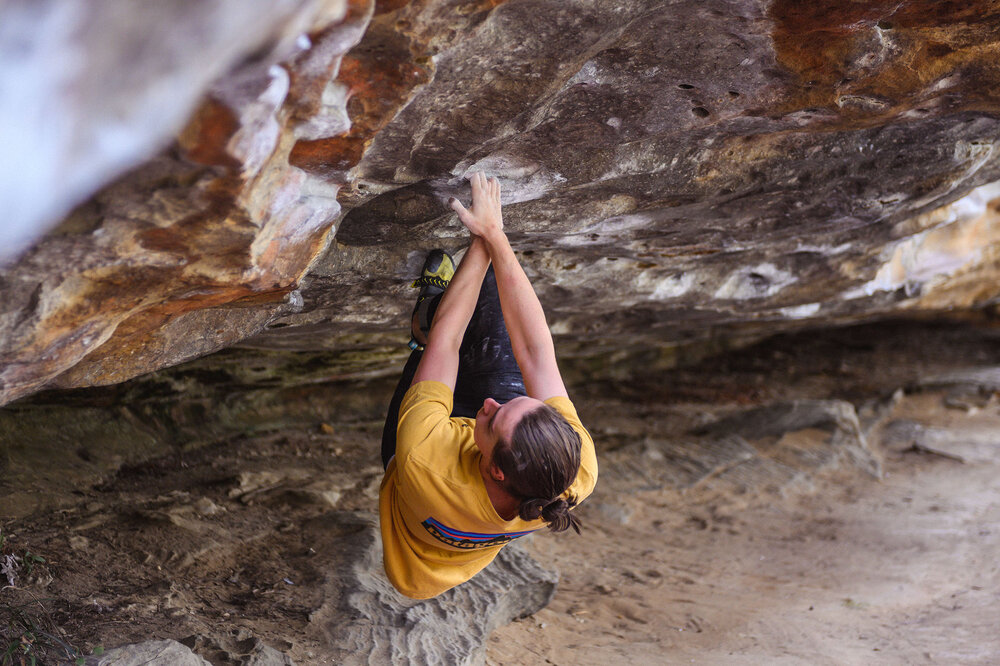 Bouldering is one of the most common forms of climbing. It’s all about short climbing routes that pack a punch!

Bouldering is a solo activity. You don’t need a rope, and no one is going to help you through your climb, aside from providing a few words of encouragement (and hopefully a good spot).

* a spotter is someone who helps guide you to the mat as you fall.

An indoor climbing gym will have matting for when climbers fall, as well as offering different graded climbs for different levels.

Next, we have highballing, which is very similar to bouldering. The only difference is that the risk is a lot higher, so you should only consider this form of climbing if you are experienced, and you’re a bit of a risk-taker.

The reason why highballing is risky is that these walls are a lot higher. I mean, the giveaway was in the name!

As mentioned, you’re not going to get a bouldering wall higher than four and a half metres. Anything higher than this is considered highballing, and climbing these sorts of heights without a rope may make your stomach churn! If it does, don’t worry; there are plenty of other rope-assisted climbs coming up!

In some instances, there are artificial highball big wall climbing facilities that are located above a large mat or net. This is rare, though, and so you will find that highballing is typically done on a rock. 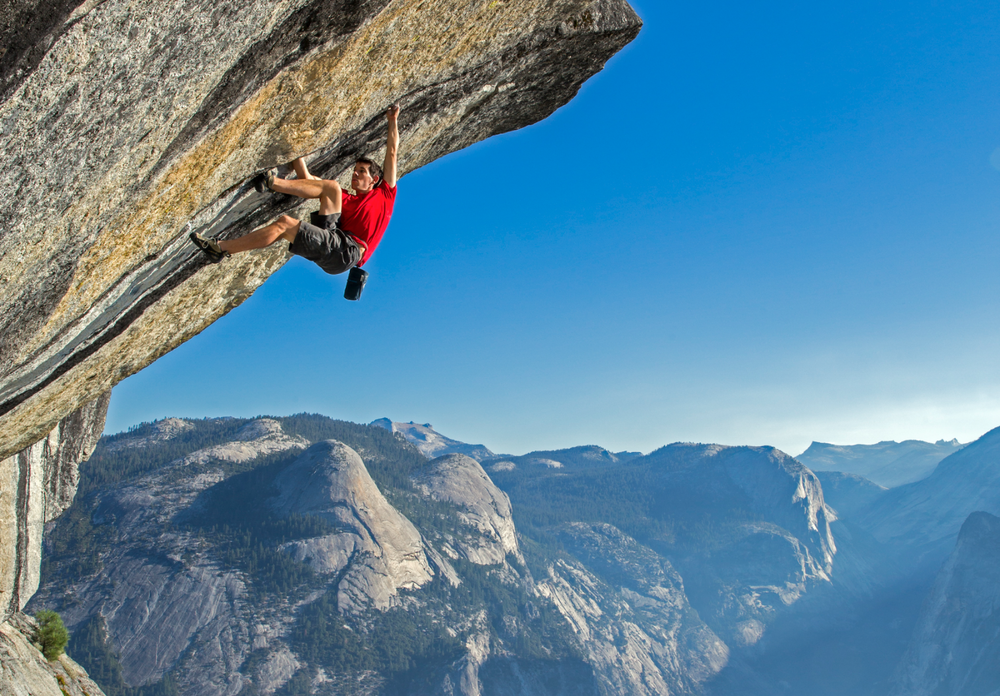 Another form of climbing that does not require a rope is free soloing.

Not only is free climbing rock faces dangerous because of the height but also the routes used and the techniques that are needed.

One of the most well-known climbers in the world is a free soloist: Alex Honnold. In 2017 he made the first free solo ascent of El Capitan in Yosemite National Park - a huge 2,900-foot, super exposed route that many people take days to climb. He did it in just 3 hours and 56 minutes with no rope or safety. Don’t try this at home kids - but do watch the documentary Free Solo.

We’re sure that a lot of you are crying out for some form of climbing that involves a rope! So, here we are, rope soloing!

Rope soloing is similar to free climbing in that you don’t have a partner and you’re climbing solo, but the main difference is you have a rope for protection.

Although it is safer than free-soloing, it can be time consuming and frustrating. This is because you need to climb sections of the route twice, as you have to fix the rope (set up an anchor) at the bottom of the climb, then climb to the top. After you complete the climb you then rappel down, detach the anchor and ascend back up your rope. Rope soloing is really a way of self-belaying. 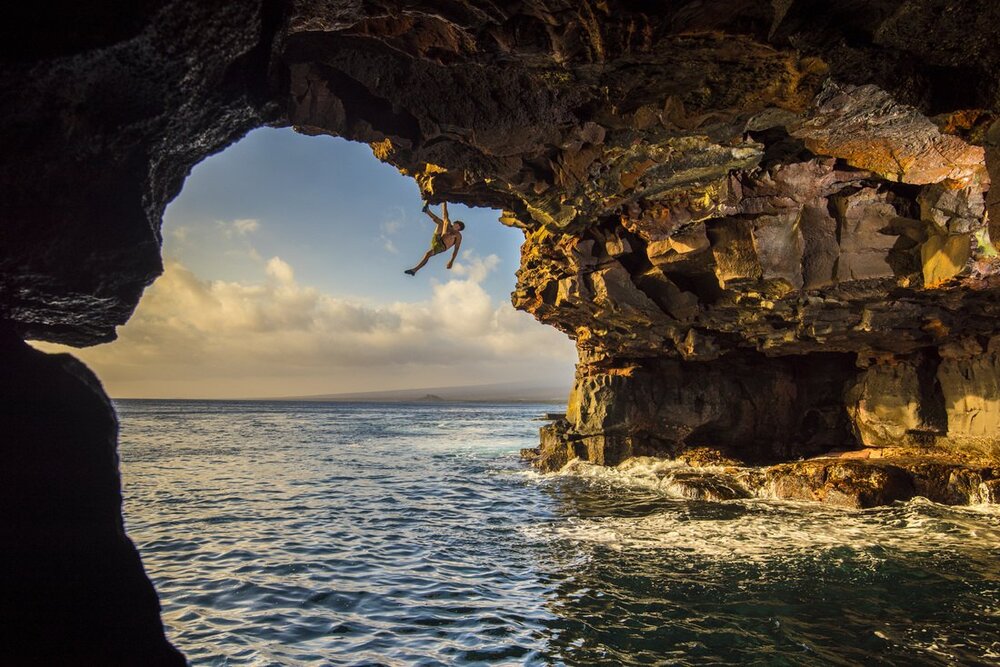 This is a climb that has water below as a “safety net” should the climber fall. If you were to fall, the water would take most of the damage.

Of course, you need to choose a spot with care. Make sure the water does not have any big rocks underneath and that it isn’t shallow. Otherwise, it’s not going to be much of a safety net! You don’t want to pay the price of a hidden boulder!

If you have been reading this and found it all a bit scary and too risky for your liking, we think you will be pleased to know about top rope climbing! It’s like riding your bike with the stabilisers on; anyone can do it!

This is one of the safest types of roped climbing. A type of anchor will be used at the top of the climb, made of a rock or boulder, tree, or bolts. The rope starts at the climber, goes up to the anchor at the top and back down to the belayer who is on the ground.

If you were to make an error, you would not fall far at all! You’d just bounce around a bit on the end of the rope. If you are looking to try out climbing for the first time, we would recommend starting with this option.

Speed climbing as its name suggests, is a form of climbing where the aim of the game is to complete the route in the fastest time possible. This type of climbing is to be included in the 2021Tokyo Olympics in combination with Bouldering and Lead climbing in a kind of climbing “Triathlon”. The official speed route is a 15m high route, set a certain way with specific holds - which means it is the same worldwide and times can be compared with others fairly. The speed climbing route is most often connected to an auto belay system for safety reasons.

Check out the latest Women’s speed record here - blink and you’ll miss it.

As the name indicates, this form of climbing requires a leader setting the route by clipping the rope into hooks and bolts that are set firmly into the rock or wall. The rope will ensure that if you make a mistake or lose your footing, you don’t fall to the ground - but just to the last point you affixed your rope.

There are different types of lead climbing, for example, trad climbing and sport climbing.

While you are climbing the route, another person helps to feed the rope up from the bottom of the wall. This individual is known as the belayer. The leader will then clip the rope into the bolts, once the leader reaches the top - this enables other climbers to climb with less risk once there is a rope firmly in place at the top. 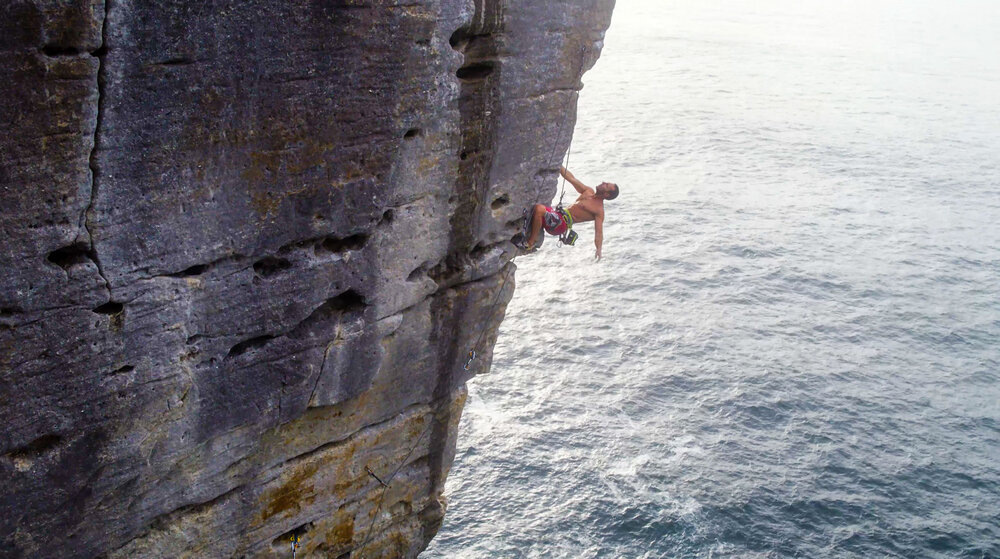 So, let’s take a look at one of the types of lead climbing mentioned: sport climbing. With this type of climbing, there are fixed rings and bolts set into the rocks, and they tend to be anywhere from around 3 - 15 feet apart from one another.

The climber uses an extender or a quickdraw to clip the rope attached to them onto the bolts on the rock. This type of climbing aims to focus on gymnastics, cardiovascular activity, strength, and technique, as opposed to a lot of other climbing methods that are more focused on risk and adventure.

Next, we have traditional climbing, or trad climbing, which is another form of lead climbing. When just starting, you will find that people are more inclined to go for sport climbing because of the convenience. More equipment is needed with trad climbing, and it can provide more of a challenge. It is a lot more demanding and riskier than people think!

You will also need quickdraws if you go trad climbing and other equipment to attach yourself to the wall, including hexes, nuts, and cams. These will be jammed into the crevices and cracks within the wall. Once you have gotten to the end of the route, you will typically need to construct your belay anchor using your trad climbing equipment. There are a few routes with belay stations already set-up.

This is any type of rock climbing has belay stations for you to stop at on various parts of your climbing route. It is a long route that is split into stages, known as pitches. The route is generally too long to climb in once section as the rope is too short. Climbs range from 50m to a whopping 1000m.

There are several names for mountaineering. Some people know it as mountain climbing, for example.

This form of climbing usually involves some hiking. However, different techniques need to be used to tackle the varying terrain and obstacles that may pop up along the way. Combined with often being at high altitudes make this type of climbing more physically demanding.

This form of climbing tends to be done in groups because support and teamwork are critical factors in progression and safety.

It is an activity that could last for a few hours, or it can be carried out as an expedition, sometimes lasting weeks or even months! For example, it takes approximately two months for the average person to get from the bottom of Mount Everest to the summit.

The terrain is what proves to be the most problematic when mountaineering. You will be faced with diverse conditions compared to only going straight up a climbing route. This includes many types of rock, as well as varying weather conditions, such as ice and snow.

As a consequence, different technical equipment and techniques may be needed.

Challenges provide different levels of danger. Crevasses, avalanches, rock falls, and glaciers all provide various problems. The high altitude can also provide issues as you go higher up the mountain and the air becomes thinner.

This is a form of climbing that requires objects or equipment to be used into the rock, helping you to progress up the rock or wall.

The aim of aid climbing is so you can use equipment to assist you as much as possible. It’s not just about safety aids, but about helping you to fulfil the climb. Some purists consider this type of climbing as “cheating”.

This is the opposite of aid climbing. You do not use any sort of equipment to help you progress up the climb. However, safety equipment is permitted. Sport climbing and trad climbing are examples of this. 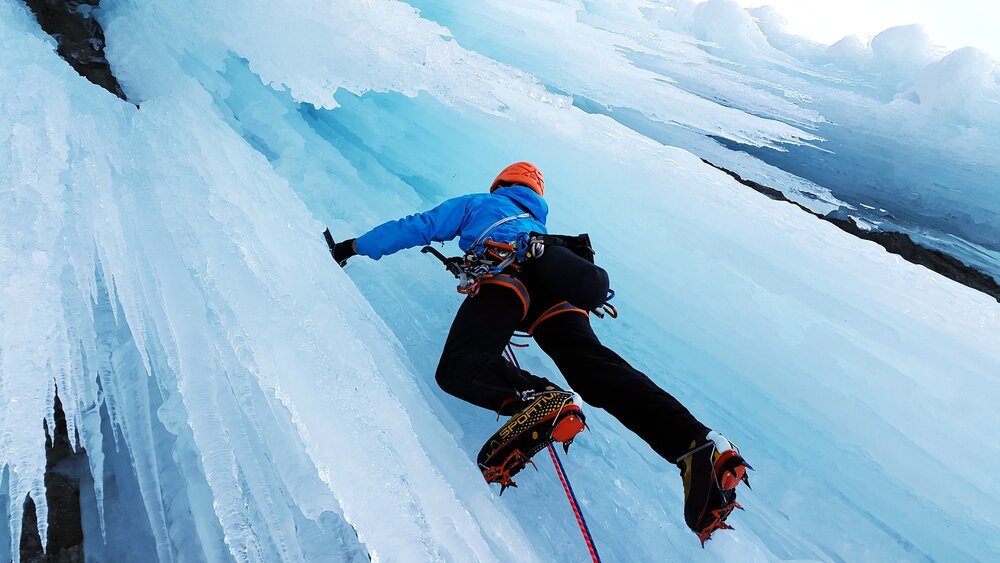 Water ice is climbed by those looking to test their technique and is usually made from frozen waterfall runoffs. Alpine climbing is typically found on mountains, and so it is usually a part of mountaineering while climbers are looking to reach the mountain’s summit.

So there you have it: an insight into the mixed climbing types that are available in the climbing world today.

As you can see, there are so many different forms of climbing. We hope that the information that has been provided has helped you to find a type of climb that appeals to you.

Be part of the action: Sign up to our newsletter and be the first to hear about Climb Fit’s latest news, special offers, upcoming social activities and more.
© CLIMBFIT PTY. LTD. 2021 | PRIVACY